Coaching little league for the first time? Don't worry! You'll be a great coach as long as you follow these essential little league coaching tips.

In 1939 Little League was established by Carl E. Stotz...who probably didn't realize how big it would become!

In recent years, there have been more than 2.6 million playing Little League Baseball worldwide.

Maybe your kid is part of a team and you've been asked to coach it, or maybe you've volunteered...either way you might be regretting your decision.

Its true, coaching isn't a walk in the park, but don't worry! We've got some great coaching tips to help make your team a success!

We've done the research and come up with some coaching tips that will make you a successful leader!

Keep reading for our top 5 tips...

Maybe you know baseball. You've been to Little League matches, maybe you even played in a team yourself in your younger days. But it's not that simple.

Rules, regulations, and policies are always being updated. You must be up to date with these changes. If you don't you might end up red-faced when trying to argue a point.

Don't forget to always carry the rule book for reference.

Just knowing the rules isn't enough, make sure to read up on the latest techniques and strategies to keep your team on top.

Safety is essential. You are supervising someone else's kids after all.

A "Safety Officer" should be appointed to oversee your team. They are responsible to keep on top of health and safety rules and regulations.

An up to date first aid box should be fully stocked and easily accessible during both practices and games.

You should be familiar with all of the players' medical backgrounds and personal circumstances and have phone numbers of their parents on hand, just in case of an emergency.

You should also choose appropriate times for practicing, i.e. not under the beating midday sun or during torrential rains. And be sure your players all warm up before every practice session and game.

You need to see this as "not just a silly game", but a chance for the kids to learn teamwork skills and make friendships for life.

You should try to be organized. i.e. have a file for each player including all of their information. Liaise freely with parents, informing them of your schedule and any big events that might be coming up.

Be confident, in control, and firm, yet fair. Respect all the members of the team and try to become like a family. This way your team will operate smoothly and you'll be on the road to victory!

Be an appropriate role model, because whether you like it or not, your players will all learn from your example, for good or bad. So watch your language, your tone and be respectful to all, especially during games. If you're kicked out of a game because of your bad attitude, your players may inherit your bad traits.

Be a good winner AND a good loser!

If you lose, don't try to shift blame onto the umpire, the other team or even your own team. Talk about how you can improve, but leave it at that, don't be bitter.

If you win, win gracefully. Always remember to teach the kids about good sportsmanship, they will all learn from your example.

Practice should be limited to 2 hours only, and the final 30 minutes should be something fun. The practices should also be well organized and planned out to save time.

Don't overdo it, you don't want to overwhelm them. Try to stick to the basic skills every week, and then have 1 or 2 advanced skills scheduled per practice.

When its game day you need to motivate them. You can do this by making time for your team's rituals and routines. This all comes down to your organization skills. Your team needs to feel organized and well prepared. Then they have a better chance of winning!

Make sure your team has lots of fun! The purpose of being on a Little League team is so they can learn many important skills like teamwork, patience, good sportsmanship and more.

But they are young and want to enjoy themselves too! Take the team out for treats, or have a pizza party. Make sure your team are happy and having fun!

So are you ready to start coaching? Following these 5 coaching tips will help you to be the best coach you can be! We also have other articles and resources available.

It's not just about winning the game it's about the memories you all make along the way. A great way to remember those moments is by having customized pins to trade. Check out our awesome selection!

This is the first step in getting your trading pins. 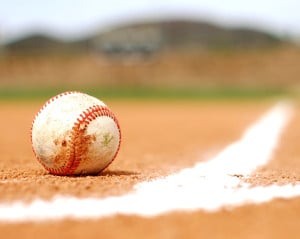 With a history approaching a century-and-a-half, the game of baseball has probably the most comprehensive available reference material of any other major sport. The game itself is remarkably unique, primarily because the basic rules have more or less remained the same as when the first recognized professional league (the National League) was created in 1876. Baseball's statistical records have been charted and maintained practically since those early days, giving both fans and researchers an almost infinite amount of data to dissect and analyze.

As in any profession, the occasional bizarre event or set of circumstances is routine, and the following is a sampling of some of baseball's most unusual occurrences as well as some of the game's "firsts," and the "just plain weird."