What Details should go on your Sports Trading Pin? 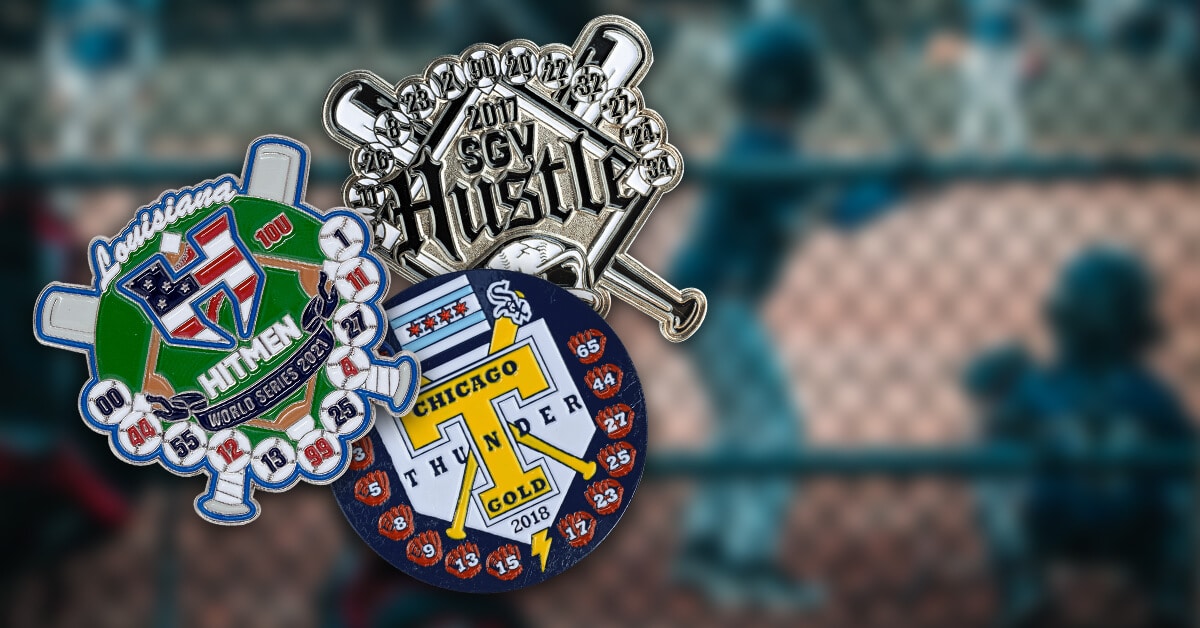 Hello Pin Traders! A Sports Trading Pin encapsulates the full identity of a team when you present at the tournaments. With limited real-estate on a sports trading pin, a question we often get from parents What details should you put on your sports trading pin design? As there is no right or wrong answer, we’ll look at what teams typically put on pins to give you a better idea heading into your pin design.

Team City (Region), Mascot (Logo) & Team Name:  This one is obvious; often the most prominent part of the pin is the Team Mascot or Logo, often centered between the City or Region name and the Team name which is depicted by the logo.

This is occasionally referenced with the state name or nickname written on the pin, but more often than not, the state is represent in in outline, either as part of the pin design or containing the other elements of the design. As pins are sized by the longer of length & width, it’s a good idea to avoid making a narrow state the entire pin outline. Often with a state like New Jersey or Delaware we’ll incorporate the state outline as part of the design but not make it the entire outline.

Player Identifiers: Including the Player’s Numbers, Names, or both is quite common, and in my honest opinion, recommended. The look on a kids face when he or she sees their identifier on a trading pin is priceless. Numbers are the easiest to include, often placed on baseballs surrounding the pin design, but an easy way to stand out is to a less common holder like gloves, batting helmets, or bats. Names can give even more meaning, but be aware they introduce intricacy. Although Numbers are either one or two digits, names can vary in length and force a compromise in size to other design elements or require a larger pin size to achieve a legible final product.

The Year: Team names are recycled within organizations so a good idea to put the current year on the pin. For kids that trade multiple years this also helps identity pins in the future.

Age Group: If playing in a tournament hosting multiple age groups its typical for teams to put their age group on the pin, like 12U, 10U. This is almost always left off for tournaments like Cooperstown where are teams are the same age group.

Baseball Themes: It’s common for team logo’s to incorporate a baseball element like a bat or a ball, but even still many teams include baseball themes like a Diamond or full field, a bat or crossed bats, a baseball or glove, home plate or a base, sometimes even a scoreboard.

Region Identifiers: Often when team logo’s are non-existent or less prominent, region identifiers are included. Some examples: a team from the Bay Area including the golden gate bridge, a team from New York with an outline of lady liberty or the Empire State building, or a team from the coast having sand & palm tree. Don’t be afraid to include local flavor if you’re from a small town, something less known can be a great ice breaker at trading time.

Upgrades: Pins in the ‘popular’ threshold typically include upgrades. Most pins will include 1-2 or more of: Glitter, Crystals, Glow Enamel, Blinkers, or a second pin that slides, spins, or dangles (called sliders, spinners, and danglers). Make sure to check our article on Maximizing Tradability to see how upgrades can actually save you money!

To find out more about these pins, click the red ‘Get Pricing Now’ button below, or give us a call at 888-998-1746 to get started on your teams design today!

Custom Baseball Pins, custom baseball trading pins, Custom Trading Pins
A guide on choosing baseball pins while custom pin trading. Baseball trading pins are available in a variety of designs, including logos and characters Are you looking to create a custom pin that no other baseball team has ever made before? Do you need a little inspiration to get the creative juices flowing? If so, […]
Read this post

How Much Does It Cost to Get Custom Baseball Trading Pins A Guide to Designing Your Own Baseball Trading Pin

Baseball Pin Collections, Baseball Pins, Baseball Trading Pin Designs, Sports Lapel Pins, Sports Pins, Trading Pins, Youth Baseball
There are some tips and tricks to great baseball trading pin design. Learn everything you need to know about composition, color, and size here. Do you want to get your baseball trading pin design just right? There are over 2 million little league baseball players in the U.S. It's a way to learn skills and […]
Read this post